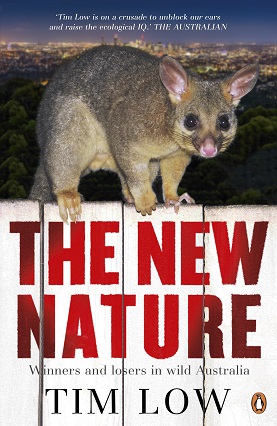 This book challenges conventional thinking about nature and conservation by showing that some native species are benefiting rather than suffering from human impacts, and exploring how these ‘winners’ sometimes go on to cause environmental problems. Examples include overabundant koalas killing eucalypt forests, and aggressive birds that benefit from forest degradation.

In an extended interview with ABC radio’s Richard Fidler, Tim talked about the book’s themes. His most recent interview about it, which touched on climate change impacts, was with Dr Karl. He spoke about it in a keynote address to the Australian Wildlife Rehabilitation Conference in Sydney, at the Queensland Gallery of Modern Art, and three talks in rural Victoria.

Humanised environments are not necessarily shunned by other species, and often provide important resources, even for endangered species such as the green and golden bell frog, found today mainly in degraded wetlands, and cassowaries which now feed on the fruit of one of Australia’s worst weeds, the pond apple.

Around Perth, endangered Carnaby’s black cockatoos have become dependent upon pine plantations as a source of seed, and the harvesting of these for wood represents a serious threat to the species, one that has attracted much public attention.

The book includes a chapter, ‘The Ecology of Sewage’, about albatrosses, waders, sharks and other animals that benefit indirectly from sewage discharges and other wastes. The book criticises the idea that wildlife-friendly gardening contributes to biodiversity conservation (garden frog ponds help common, not rare, frogs), and questions whether wilderness is a useful concept, when so many species are now bound to human impacts. It is fully referenced.

This book was listed by New Scientist (Australia) as a number 1 best-seller and by Who magazine as one of the books of the year. It won the inaugural Westfield-Waverley literary award, now called The Nib, for excellence in research, and received a special mention at the Centre for Australian Cultural Studies National Awards.

After reading this book, the then environment minister, Senator Ian Campbell, invited Tim to serve on his advisory committee (Biological Diversity Advisory Committee).

The book gave its name to the second National Local Government Environment Conference and to an art exhibit in New Zealand that drew on its ideas.

Here is a quote:

“It strikes me that our concepts of nature often don’t match what we actually see. Native animals are taken to prefer their natural habitats and natural foods when often that’s not true. The words ‘nature’, ‘natural’ and ‘wilderness’ end up misleading rather than informing us about the natural world. We shouldn’t presume that nature, merely by definition, wants to be natural. This book is an attempt to redefine that difficult word ‘nature’ by putting people in the picture and taking wilderness out.”

This repositioning of the human-nature relationship has attracted much interest from humanities scholars, and also from visual artists.

Endangered lizards depending on sheep paddocks

Possums as a threat to endangered birds

“Low argues with a novelist’s zeal that the line we draw between ‘good, pure, harmonious nature and evil, selfish, destructive humans’ is as artificial as the blue plastic that bower birds seek out to decorate their forest boudoirs.”
– Time

“Tim Low is on a crusade to unblock our ears and raise the ecological IQ.”
– The Australian

“[Tim Low] makes a strong case, through presenting many ecological case studies, for a new understanding of the natural. And he does so in a popular style that is acessible to the non-scientist. For this Low is to be congratulated.” – Sydney Morning Herald

“the award-winning book The New Nature remains compelling and relevant today. This thought-provoking, rigorously researched book examines the relationship between humans and nature, changes our conceptions of wilderness, and reveals stories of fascinating species hiding in plain sight in our cities and backyards.”
– Australian Geographic

“an important and timely book, full of good ecological common sense…Low’s great contribution is that he has presented complex concepts in a highly readable and provocative form. The New Nature should be read by all with an interest in nature conservation.”
– Peter Menkhorst, Australian Book Review

“This is the best book I have ever read, anywhere in the world, about how we save the planet.”
– Don Burke, Burke’s Backyard

“A clear look at what is really happening with the creatures living in Australian environments and about solutions that work, not just make us feel good…An important topic presented in a readable manner by an expert. Read it.”
– Good Reading Magazine

“The New Nature is destined to be as successful as Low’s critically acclaimed Feral Future. The book brings something new to ecological literature by concentrating on issues not previously covered in books on the environment. It is full of descriptive content, which includes a vast amount of interesting and amusing anecdotes.”
– Pacific Conservation Biology

“Tim Low’s New Nature (2002) and the recent CSIRO work on the implications of climate change for the National Reserve System (Dunlop and Brown 2008) challenge us to develop a new paradigm to secure biodiversity assets in the twenty-first century.”
– Australian Zoologist

“Read this book carefully, consider the qualifications on its bolder statements, and perhaps you’ll make some sense of the muddled state of this continent.”
– Habitat magazine

“The new nature is packed with fascinating stories…”
– Ecopolitics

“So glad Tim Low’s The New Nature is republished. Original was years ahead of its time. Important and massively influential. Do read it.”
– Tweet by Ian Lunt, ecologist